You are Here : Home blog Easy Step By Step Guide To Embroidery Digitizing 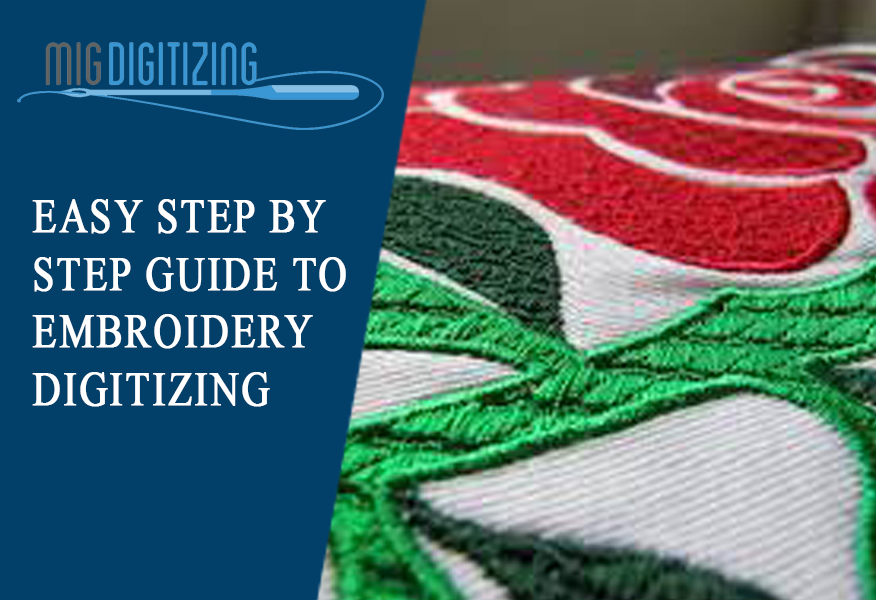 So, you've made it this far! You've decided on a design, colour scheme, and material. Your final piece has been lovingly sewn together. Congrats! However, there is one aspect of your stitched work that you may not have considered yet: how you will display it. But, before we get into the meat of the matter, let's review the fundamentals.

Embroidery digitizing, in its most basic form, is the art of decorating fabric using a needle and thread. We've been embroidering since at least Ancient Egypt, as evidenced by artwork found within tombs and pyramids, and later confirmed when an undamaged embroidered flower collar was discovered in Tutankhamun's tomb! Hand embroidery and machine embroidery are the two types of embroidery.

What Is Machine Embroidery?

If you see a pattern on a piece of clothing or an accessory at a store, it was almost certainly machine stitched (unless you're in a very special, boutique shop!). These machines come with software that allows you to create digital embroidery designs. The machine then stitches the identical pattern onto the fabric - perfect for speedy fashion! Machines are constantly improving.

What Is Hand Embroidery?

So, what exactly is hand embroidery? Aside from the name's obvious hint. It's an art form with a plethora of varieties. Embroidery has evolved in many civilizations at different times. The variety of distinct forms appears to be unending. These are some of the more well-known embroidery styles.

The only stitch used in needle painting is the long and short stitch. Needle painters, like painters who use paint rather than thread, can use unexpected colours to achieve a finished product. The difficulty arises from the need for an artistic eye to mix the colours and select the appropriate thread colours. Although it appears to be difficult, the stitch is actually fairly simple! This allows you to mix and match different colours. So you're using thread to literally "paint" anything.

Metallic-effect threads may have been utilised, however, they are normally manufactured from a cotton/synthetic material hybrid. It's a pricey method of needlework, but the end effect is well worth it! The thread is sometimes totally formed of metal, and other times it is a metal leaf wrapped around a regular thread.

There are so many amazing needlework artists out there that there isn't usually a specific name to describe their style! Surface embroidery is used in almost all of the embroidery patterns on my website. It's a 'generic' type of needlework ('surface embroidery' can refer to nearly anything). It's essentially freestyle stitching, in which you embellish fabric with stranded cotton thread and any of the hundreds of embroidery stitches available.

Blackwork was traditionally done with black thread (to cover dirt buildup!). It's a counted-thread technique that uses the Holbein stitch, which is a unique stitch. However, it may now be done in any colour! Spanish embroidery is another name for it. If done correctly, your pattern will be completely reversible, with the same appearance on both sides. Unlike much stitching (my hoop backs are frequently a shambles!),

Stumpwork is sometimes known as 'raised work,' which is a more accurate description of what it is. Nowadays, stumpwork with felt is perhaps more common, with the felt sewn over to create lovely layering effects. Wires would be shaped (for example, into a leaf form) then stitched around in traditional hand-embroidered Stumpwork before being fastened to cloth.

On garment accessories, you might see a manufactured variation of this (called puff embroidery), where the threads appear to be held up by something behind them. They do, it's a secret!

Crewelwork is a type of surface embroidery that uses wool strands. You can produce gorgeous textural textures that are more difficult (or impossible!) to achieve with stranded cotton thread since the thread is heavier and thicker. Consider pillows, drapes, or opulent bed hangings!

Because the wool thread is thicker and heavier than the stranded cotton thread used in surface embroidery, the fabric embroidered on in Crewelwork is often thicker. The Bayeux Tapestry is the most famous example of Crewelwork. A 70-meter-long fabric depicting the events leading up to the Battle of Hastings in stunning detail.