You are Here : Home blog Types Of Hand Embroidery Stitches And Temporary Stitches 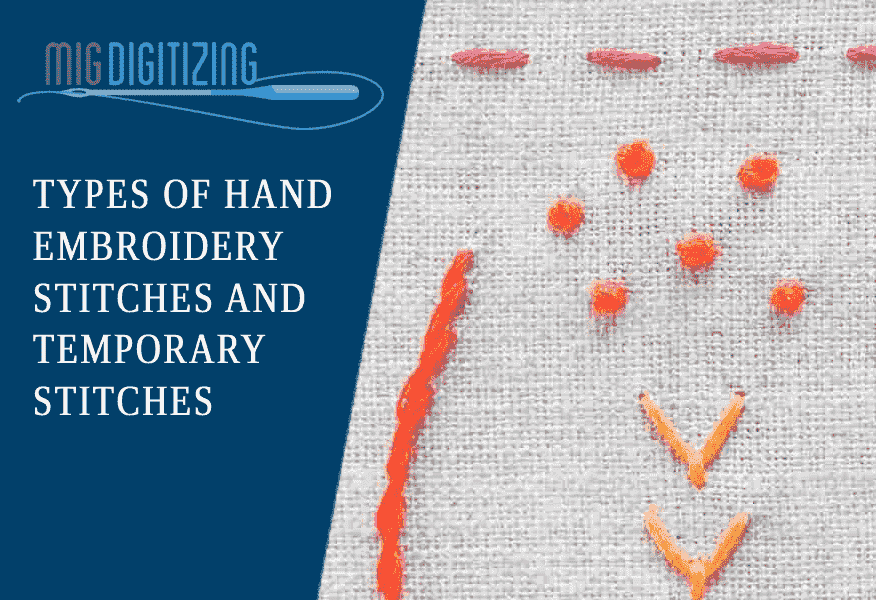 The stitch is usually stitched from right to left, beginning with a knot in a contrasting colour thread to make it easy to remove.

The stitches on the upper side are at least twice as long as those on the underside. Longer folds and seams can be stitched with this technique. This is far more powerful than even tacking. When there is little or no strain, use this tacking as a guideline.

Start the stitch with a knot and a thin needle. On both sides of the material, the stitches are about the same length. At one moment, a large number of longer stitches can be completed. This is for tackifying seams and other features that need to be held in place.

Begin tacking with the second thread of contrasting colour to make them stand out. Tack through the second layer of cloth along the seam lines with even length threads, leaving them as a loop rather than pushing them tight. After you've finished, slightly elevate the top piece of fabric and snip the thread between the layers. In order for the thread tuft to remain on both layers of fabric and serve as a guideline. This is particularly useful for identifying subtleties between patterns, such as darts and pleats.

This sort of stitch is used to join two or more layers of fabric before forming a machine embroidery stitch. Thread through the material at a right angle to the fabric edge, so that the upper side has a diagonal or slanting stitch and the underside has a vertical stitch.

Hand sewing is the foundation of couture sewing, which a home sewer should be aware of. Embroidery digitizers believe that a machine cannot achieve the same level of excellence as meticulous hand sewing. There are a few hand stitches that you should learn to complete your sewing expertise.

This stitch looks a lot like a running stitch, but it's made up of very lengthy stitches. This stitch is frequently used instead of pinning. Fabric can also be gathered with this tool.

Even basting: Even basting consists of 1/4 inch long stitches on both sides of the fabric.

This hand stitch is quite strong. If you don't know anything else, study this and you'll be able to sew anything. Pull the needle through the fabric as far as it will go. Take a stitch downwards, then bring the needle up by going forward the same distance as the first stitch. Bring the needle down to the first stitch's beginning. To get a long line of strong stitches, keep going in the same direction. As a decorative stitch, a half backstitch is employed. Only half of the length of the initial stitch is carried back in this stitch. The backstitch can also be called a pick stitch. The needle merely moves back one or two threads of the fabric in this technique.

It looks like a herringbone stitch. The needle catches a thread or two from the first fabric, then the thread crosses and the needle moves on to the second fabric to capture a thread or two. This is a fairly flexible stitch that is ideal for stitching hems that require some stretch.

This stitch is comparable to whip stitch and is typically used on the fabric's raw edge. It's used to neaten edges and keep threads from unravelling in the raw edge. Short diagonal stitches are produced over the fabric's raw edge in this technique. They're all the same length, and the spacing is consistent throughout. Double overcasting occurs when this stitch crosses to make an x.

An overcast stitch can be made in a variety of ways.

From the back to the front, bring the needle out 1/4 inch from the fabric's edge.

Place the needle point in the back of the needle. From the back to the front, bring the needle out 1/4 inch to the left. This will result in a stitch that encloses the edge. Make sure that all of the stitches are spaced evenly.

This is a hem stitch that is not visible. The needle is drawn through the hem's fold, then out to snag one or two threads before returning to the folded hem. Then move on to the next stitch, making sure that only a small amount of the thread is visible outside.

How to Do a Slip Stitch

Insert the needle into the fold of the hem to make this stitch on a hem (between the two layers of the fabric). The knot will now be encased within the fold.

Take one or two threads from the main cloth with the needle.

Return to the hem and insert the needle into the fold, just to the left of where you drew the thread. Pass the needle through the fold 1/4 inch. Remove the needle.