You are Here : Home blog Where To Find Custom Patch Trucker Hats? 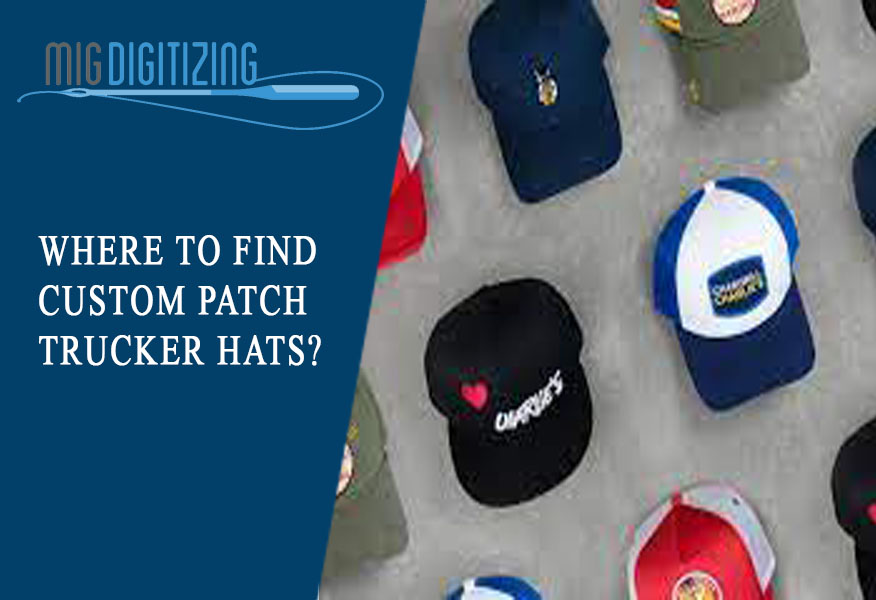 Patches on hats with embroidery combine the best of both worlds: they provide a unique embroidered aesthetic while still providing a casual patch style. Everything about embroidered patches may be customised, from the form to the colours to the overall appearance of your logo. Because of its timeless style and durability, this traditional alternative has been utilised time and time again as a technique of ornamentation. These hat patches can reflect an organization's insignia, your brand, and much more, with more detail than straight embroidery. The only limit is your imagination.

They're very similar, and frat-bros and sardonic hipsters frequently wear them backwards. Baseball caps can accommodate custom headwear for patches, whether they include a player's name, a company, or team insignia.

Mesh bodies with a foam front panel and seamless fabrication are common features of trucker hats. Trucker caps were originally provided as gifts by equipment providers, feed stores, and big distributors to promote their products. In comparison to a baseball cap, the front is usually taller and more vertical. Baseball hats, on the other hand, have a lengthy history of popularity, stretching back almost to their inception. Celebrities seeking publicity began wearing trucker hats in public and in the media by the early 2000s. The basic hat became a trendy accessory with a little help.

From Little League to Major League Baseball, the baseball cap has become an integral part of the game. A reliable source, such as Migdigitizing.com, might be useful when it comes to custom patches. According to some stories, the first baseball caps were fashioned of straw. Around the turn of the century, the prototype to today's style appeared, complete with an attached bill to keep the sun out of the players' eyes. They rapidly gained popularity among the time's amateur players. Whether it's for trucker hats or baseball caps, we'll make sure your headgear is in tip-top shape and your personalised patches are of the greatest possible quality. Allow us to demonstrate how simple it is to order bespoke patches for caps. The official cap of Major League Baseball was standardised, and the rest is history.

What is the best patch size for a hat?

Because each hat size is different, there is no fixed standard for what size patches should be used, but the optimum overall size for a patch on a hat is anywhere between 2 and 2.25 inches tall. This will determine the size of our final patch! Direct embroidery, which may go up to 5" wide by 3" height, is another way to use a patch. To calculate a patch size, you must first determine the largest width of your intended patches in order to do an exact calculation: add the highest point on both sides, then divide by two! The width of your design will be proportionate to its overall shape.

What style patch looks the best on a hat?

Simple designs can be embroidered, printed, or manufactured out of leather or PVC, whereas more complex designs may need printing processes such as full-color sublimation or weaving. The price of a personalised patch is determined by the brand and quantity of hats you want to order. On custom shaped patches that follow the outline of your emblem, the adhesive is used. For example, if you require 112 Hats, the cost per hat will be around $21. A unique patch will be stitched directly to the caps as part of the price.

How are patches applied to hats?

Patches are usually placed directly onto a hat with machines similar to those used by embroiderers. Hats have an odd shape, thus custom shaped patch designs will need to be heat pressed with adhesive, as following the border of an elaborate logo with needle and thread is too difficult. A heavy-duty needle will be required, especially when putting a leather patch to a cap.

These top manufacturers are the best hat brands for businesses to use since they preserve strong inventory levels and have nationwide distribution. Flexfit also has a unique selling point: its proprietary One Size Fits All design. Nike's exceptional customer service and superb options for your workplace golf event mean no more guessing games or returns with their all-sizing system. When ordering, keep in mind that the style you want may be sold out in one region but available in another.

When ordering, keep in mind that the style you want may be sold out in one region but available another, specializing in superior headwear designs from just about every major sport imaginable, including baseball caps and trucker hats - they even offer custom embroidery service, making them ideal corporate partners because of their personalised attention to detail! New Era provides hats with a great feel-good factor that get your brand noticed.